*Warning* This post contains spoilers (if you’re a guest or host of the dinner party I’m going to tomorrow!)*

If I’ve learned anything from last weeks Bake-Off, it’s probably never to attempt a Baked Alaska in the height of summer… or at all! Poor Iain, the stress got to him – and having thrown pastry in the bin last night in frustration, I’m pretty sure I would have done the same in the Bake-Off tent. There was a lot of controversy over how long his baked Alaska was out of the freezer, why Diana had done it, why he hadn’t been told etc – but I’m sure the editors had a hand in making it seem so dramatic – and only those in the tent really know what happened. Fingers crossed this week will be less stressful – Although mine hasn’t been… 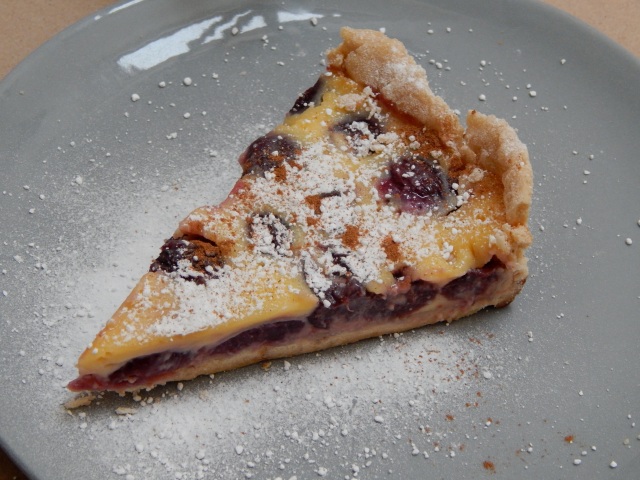 This weeks challenge is Tarts and Pies. I’d decided to make a tart as we’re going to a dinner party, and I thought it would be a good dish to take over for dessert. I thought this would be a nice, easy, week as I’ve made them in the past – but something happened to me last night and I just couldn’t get the pastry right. The first batch ended up over-worked and got chucked in the bin, the second batch either didn’t have enough water in it, had too much butter in it, or was too cold – and just crumbled when I tried to roll it out. I think I’ll stick to cakes in the future 😉

In the end the OH had more patience than me and managed to coax the second batch of dough into behaving by adding a bit more water. It was never going to the best dough ever though as I realised later I’d forgotten to add the caster sugar to it second time round too! It ended up ok in the end though… I tried a little bit this morning just to check, and the flavours of the tart are really nice together, and sweet enough that you don’t notice the unsweetened pastry. 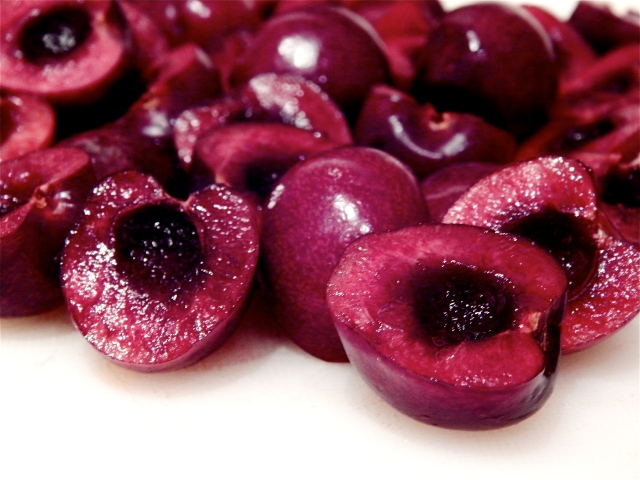 I’ve got a hankering for cherries at the moment, and found a recipe on Red online by Gregg ‘It’s like a hug in a bowl’ Wallace (Masterchef presenter) which combines the cherries with white chocolate and a hint of cinnamon – a done deal in my eyes! I hope the other guests agree 😉 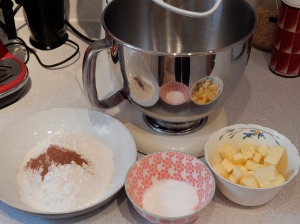 NB: I bought two tins of pitted cherries to use as they were cheaper, but they didn’t taste strongly enough of cherry for me, so also bought some fresh ones and did ‘half and half’. There were also some fresh cherries left over for decoration!

1. To make the pastry, sift the flour and cinnamon into a bowl. Add the butter and rub in with your fingertips until the mixture resembles fine breadcrumbs. Stir in the sugar and add enough of the water to mix to a firm dough.

2. Turn the dough out on to a lightly-floured surface and knead briefly. Wrap in foil and chill for 30 minutes. 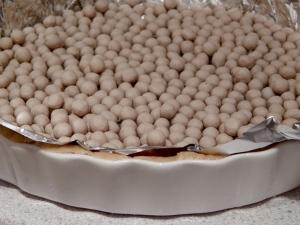 3. Roll the dough out on a lightly-floured surface and use to line a 23 x 2.5 cm deep loose-bottomed flan tin. Trim off the excess pastry around the rim. Prick the tart case with a fork all over, to stop it rising. Line the tart case with foil, fill with baking beans and bake in a preheated oven, 200°C /400°F/gas mark 6, for 10 minutes. Remove the foil and beans and bake for a further 5 minutes. Reduce the oven temperature to 180°C/350°F/gas mark 4.

4. Meanwhile, to make the filling, beat the eggs and sugar together in a bowl. Put the chocolate in a heatproof bowl. Heat the cream in a small, heavy-based saucepan, then pour over the chocolate and stir until the chocolate has melted. Pour over the egg mixture, stirring constantly.

5. Pit the cherries, if using fresh, or thoroughly drain the canned cherries. Arrange in the flan case. Pour the chocolate mixture over the cherries.

6. Bake in the oven for about 45 minutes until the chocolate cream is set. Dust with cinnamon and serve warm, decorated with extra cherries if you like.

As you can see it, it turned out pretty ‘rustic’, but it tastes good… Fingers crossed it goes down well tomorrow evening!