And now back to the main event…

The start of the menu! (Not all from the sea admittedly, but the majority was…)

We had some delicious bread to choose from before the main menu started, and were encouraged to try at least three different types – I tried to only eat a teeny bit of each, as I was getting a bit worried about how much there was to come!

Luckily the first course was very light and refreshing. We started with a summer vegetable stock which was a joy to behold, I didn’t want to eat it as it was so pretty. But I managed it in the end. It was in-between sweet and savoury as there was mango in it as well as all the lovely vegetables, and it was served at a low temperature. 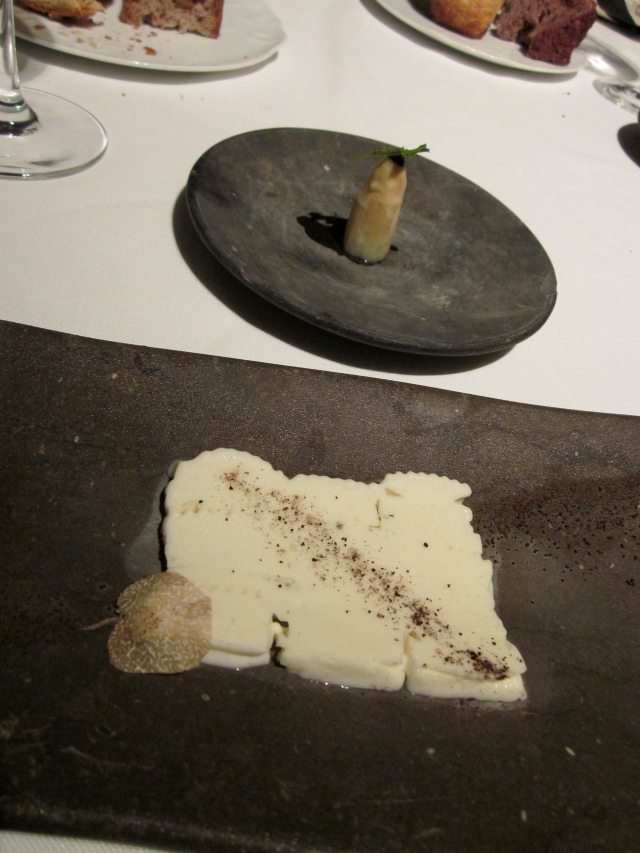 Next came a white asparagus and truffle ‘viennetta’. Yes that’s right, savoury ice cream. The first mouthful was a little odd, possibly because my brain was trying to decide if it liked creamy cold vegetable ice cream, but from then onwards it was enjoyable – if still slightly strange! It was paired with a Riesling which was quite sweet and therefore further confused my brain as to whether this was dessert or not… but it’s good to try something completely different 😉

The OH and I aren’t the biggest fish/seafood fans in the world – I like fish as it’s long as it doesn’t taste too ‘fishy’, and i’ll try pretty much any seafood, but prawns are the only seafood I actively seek out on a menu – the OH doesn’t like them at all so that’s the only time i get to eat them! We decided therefore that there were a couple too many fish/seafood courses for us, as interesting as they all were, I would have been more excited about a couple more meat/vegetable ones.

The first fish course was Mackerel – a ‘fishy’ fish! It was marinated in sugar and salt, served with pickled capers and chillies, fried tomato, mullet roe, and a mackerel sauce. It looked stunning – the mackerel sauce was made using the skin so that it glistened on the plate, and it was made to look like the pattern on the skin. Clever stuff. If you like mackerel i’m sure you would love this dish, I really liked the pickled bits with the mackerel as it was a nice contrast in flavours, but overall it’s just too fishy for me.

Next up was the dish I was most scared of when looking at the menu: A salad of Sea Anemone, Razor Clam, Sea Cucumber and Seaweed in escabèche. I’d never tried any of the items listed except seaweed before, and the presentation of the dish didn’t particularly allay my fears either – it looked like everything was about to crawl out of the bowl! A good-looking bowl it was though. The actual taste of this dish was fine, although I didn’t think any of the seafood tasted of much – it seemed to be more about the texture. I would’ve been happy with about half of that amount. You did get to eat it with tweezers though which was pretty good fun! 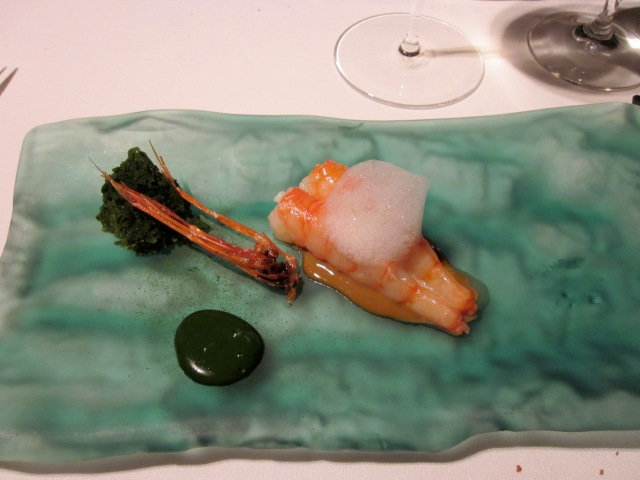 Next up was a dish entitled ‘A whole Prawn’. This was: Charcoal-grilled king prawn, crispy prawn legs, head juice with seaweed, and a seawater & sponge cake of plankton. I thought this was going to be my favourite of the seafood dishes as it had my favourite item of seafood as the main event – sadly i didn’t love it.(The OH liked it more than I did!) The crispy legs were pretty tasty, the head juice was ok, the plankton sponge cake was strange, and the prawn just wasn’t cooked enough for me – I really didn’t like the texture of it. Strange. 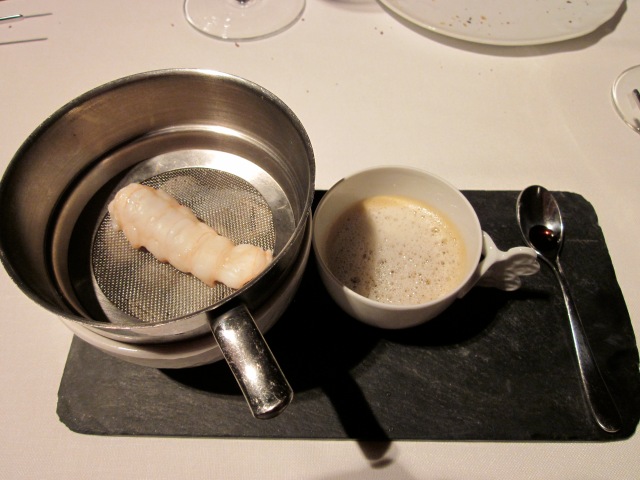 Luckily the next few courses made up for the first few 🙂 Next up was Langoustine. This was brought to the table in a steamer with hot rocks underneath. It was then cooked at the table – the waiter poured sherry onto the hot rocks, then put the lid on the steamer – within about thirty seconds the langoustine was cooked. The sherry gave it a sweetness, and it was a nice touch to see it cooked in front of you. it was served with a bisque velouté that was utterly delicious – I could’ve drank another couple of cups of that at least! The wine pairing for this course was sherry (unsurprisingly). But surprisingly, it is that blob you can see on the spoon above. It had been reduced down to almost a caramel, so you had to just suck it off the spoon – another nice touch.

The last of our fully seafood/fish-orientated courses was another good one: Confit Skate served with six different types of mustard. Doesn’t sound like much, but the Skate was melt-in-the-mouth, and the mustards all gave an interesting dimension to the flavour of the fish. There were hazelnut flavours, bergamot, honey, and more – it was fun to mix up the different sauces with the Skate and see what you came up with…

Next up: The Meat courses… (this really is turning into an epic!)