And now it’s time for the meat courses! 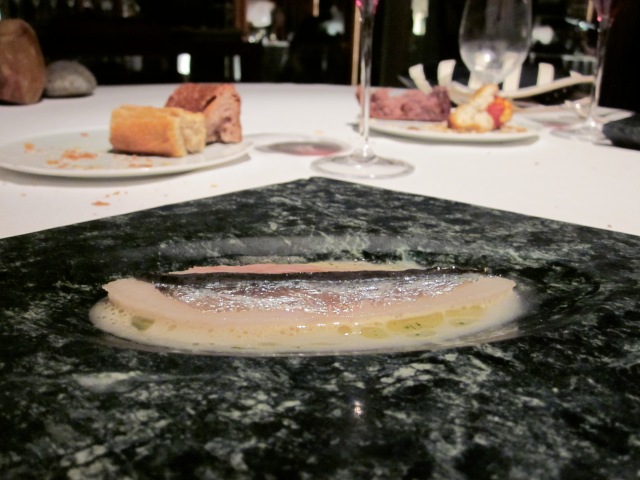 This plate was a bit of a cross-over dish: ‘Surf and Turf’. It looked like a piece of sardine, but that was a cunning ruse to make you think you were still on the fish courses. It’s actually pork jowl, with sardine skin, a charcoal-grilled sardine-bone broth, suckling pig sauce and chervil oil. It was ridiculously beautiful to look at, with the shimmering sardine skin and the pink of the jowl – i’d like a clutch bag in similar shades 😉 The pork jowl is a very fatty cut, but it worked well with the sardine, and the sardine flavour wasn’t strong enough to overpower the dish which was great.

Another ridiculously pretty plate (slab?) of food – ‘Spicy mandala of artichoke flower, milk-fed lamb belly, lamb sweetbreads, curry yoghurt, beetroot, spinach, turnip, lemon, tangerine, sweet potato, leaves and flowers’. That is a bit of a mouthful for a dish that is only a little bigger than a mouthful! Mandala is actually the pattern made by this dish rather than an ingredient – it’s a hindu and buddhist symbol representing the universe. The lamb in this dish was melt-in-the-mouth, and it was nice to have lots of different flavours to combine and eat it with – a bit like the skate dish earlier in the evening.

This next dish was the OH’s favourite of the night – ‘Veal shin with St.George’s mushrooms, marrow, tendons, avocado and truffle’. The main thing I thought whilst eating this was ‘the ultimate roast dinner’. Ok so it was missing some roasties, but it had that rich, comforting taste to it that I associate with a good roast dinner – and a bit of earthiness too. I know it says tendons on the menu which could put people off, but I’m guessing it was in a puree because I couldn’t see anything resembling a tendon! Plus, I adore bone marrow, and truffles, so it goes without saying this dish would be enjoyed.

This last meat course probably would have been my favourite, but I was getting pretty full by this point so it was hard to thoroughly enjoy it. Despite this, one part of it did blow me away a bit. The full description of this dish is: ‘Pigeon heart and the cloud of rice, pigeon stock. “Botifarró” and Tatjé pigeon breast. Botifarró is blood sausage, and the pigeon ‘heart’ was actually pâté made to look like a heart (on the black slab). The pâté was the best I have probably ever tasted – so velvety, smooth, rich – utter deliciousness on puffed rice. The rest of this pigeon dish was equally rich, and almost as delicious. It was served with a small amount of pigeon stock in a glass, and the wine that came with this course was from 1986! (Pesquera Janus 86 D.O. Ribera del Duero). This felt pretty decadent.

In the next (and final) instalment, find out what we had for dessert, and if we managed to get out of our chairs at the end of the night…

2 thoughts on “El Celler de Can Roca Part 3: The Land”