The Bake-off’s back (sort-of – it’s a comic relief one)… and what better way to celebrate than with brownies? I had some excellent brownies baked for my birthday recently by my mother-in-law, and they reminded me that I still hadn’t put this recipe up which is a crying shame as it is so tasty. Well here it is:

A lot of good words in one sentence.

When my sister, brother-in-law and nephew came to stay a while back, I wanted to bake them something, but my sister is a mega-picky eater so I felt like I couldn’t do anything even vaguely crazy – which made me want to even more 😉 Instead, I thought of a way to satisfy her, and me (and the rest of the family), by making a normal brownie with half of the brownie mix, and putting salted caramel and blackberries in the other half! Success. The brownie mix is really fudgey and tasty on its own which is great, but put a layer of salted caramel and some blackberries in the centre and it becomes ridiculously good.

makes around 20 brownies (depending on how greedy you/your recipients are!)

For the salted caramel filling:

Pinch of sea salt (to taste)

For the sauce: Put the sugar in a pan over medium heat and heat until it turns a dark brown colour – keep an eye on it, as it will burn if you’re not careful. Remove from the heat before it starts to smoke and pour in the salt and half the cream. The mixture will bubble and spit at you (rude) so be careful! Once it’s calmed down, add the remaining cream and the softened butter. Put back on the heat and stir until smooth. Set aside.

For the brownies:  Preheat the oven to 180°C. Grease a brownie tray and line with baking paper.

Sift the flour, cocoa powder and salt into a bowl and set aside.

Put the chocolate and butter into a heatproof bowl and set over a pan of simmering water. Stir until melted, then remove from the heat and allow to cool slightly.

Whisk the eggs and sugar together until thick and pale in colour.

Whisk in the cooled chocolate/butter mixture.

Add the flour/cocoa powder/salt mixture and fold until just combined, don’t over-stir – you want some air left in the mixture.

Pour half the mixture into the prepared pan and level out.

Dot the blackberries over the mixture, then add a thin layer of salted caramel sauce. Carefully spoon over the remaining brownie mixture and level it out.

Bake for 25-30 minutes or until a toothpick inserted in the middle comes out almost clean (a few crumbs are fine). 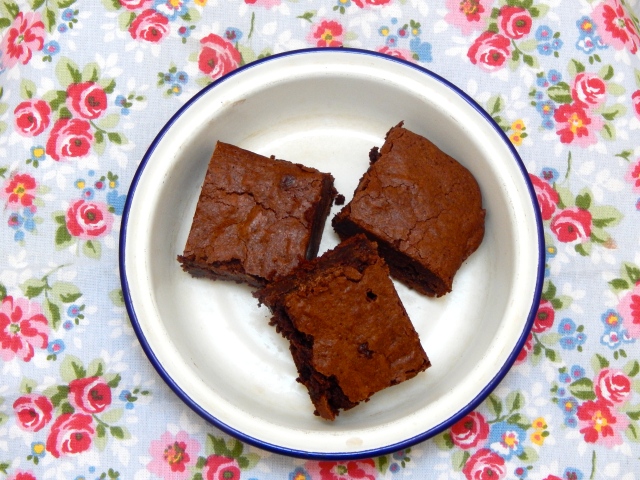 Enjoy the fruits of your labour – try not to eat them all in one go!

If you want to make normal brownies just leave out the sauce and blackberries, if you want to do half and half just halve the mixture for each type 😉