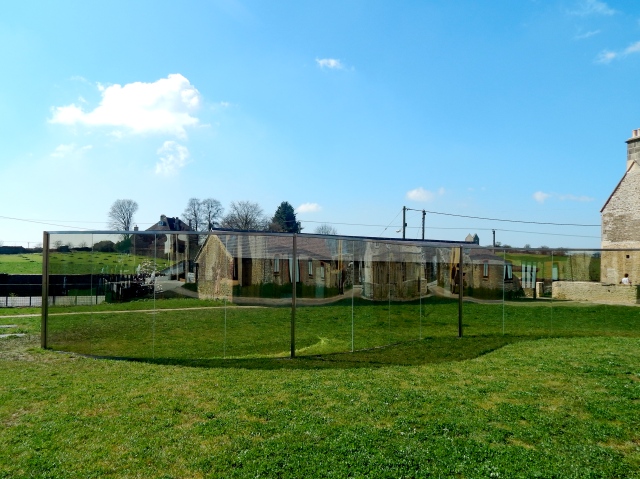 Easter Monday was a glorious day in Somerset, so the OH and I decided to go out exploring and ended up at Hauser & Wirth, an Art Gallery with a garden and restaurant just outside Bruton. We’d been meaning to visit for a while, as the gallery opened last year and is quite a big deal – they have galleries in New York, Zurich, London – and now Somerset! 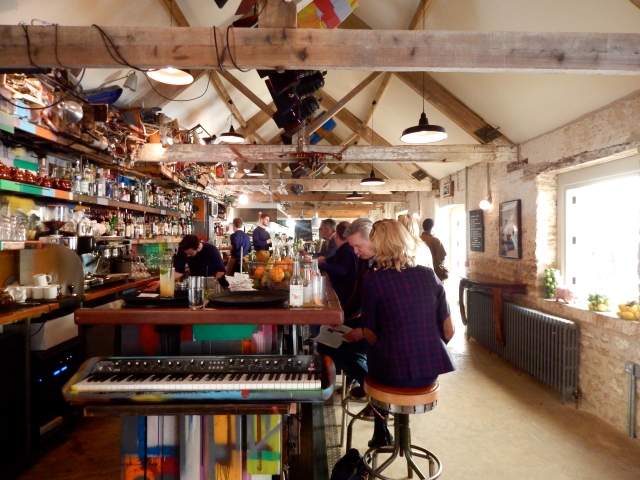 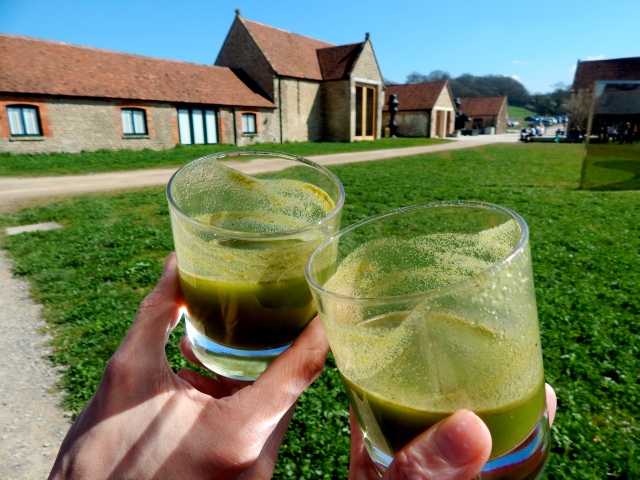 We arrived feeling pretty thirsty, so headed straight to the (very cool) bar, and got talked into trying a ‘Dovecote Breeze’ (£4) by the barman. This was a combination of celery, apple, kale and pear juices, and was delicious. It quenched our thirsts and also left us feeling quite virtuous… 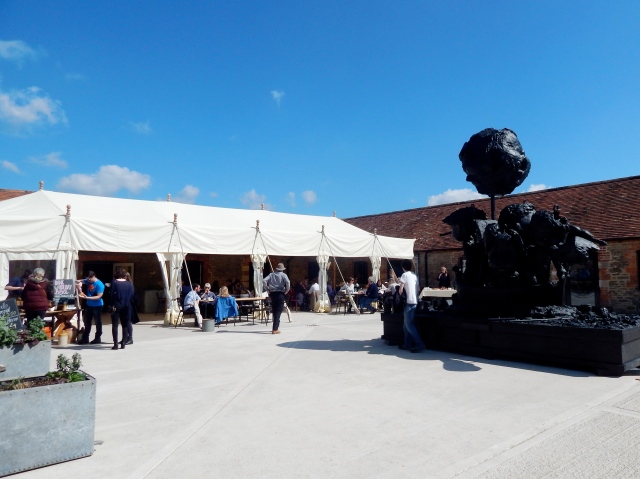 The courtyard was buzzing with people and a barbecue was taking place which was tempting, but we were trying out the restaurant later so had some will power and headed into the gallery…

The gallery is housed in the grounds and buildings of Durslade farm (including the Piggery), and is free to visit (there is a donation bucket in the shop). There are currently three main exhibitions on show, the biggest  by a Chinese artist called Zhang Enli – large-scales paintings inspired by nature and the changing seasons. There was also a sound installation by Susan Philipsz – inspired by the farm buildings and the theme of traditional country dancing. It is also ‘Architecture Season’ at the gallery, which meant over 100 architectural drawings and sculptures by leading architects such as Frank Lloyd Wright and Rem Koolhaus were on display (as a recently qualified architect, this pleased the OH no end).

Some of the architectural drawings

One of the sound installations in the Threshing Barn

The Cloister – very peaceful spot to sit and soak up the sun! 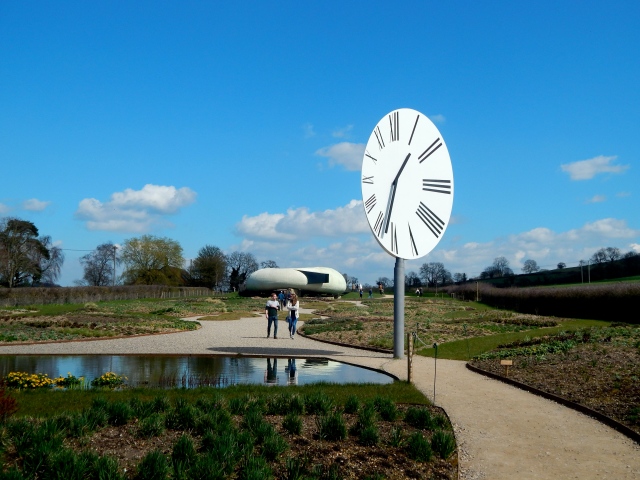 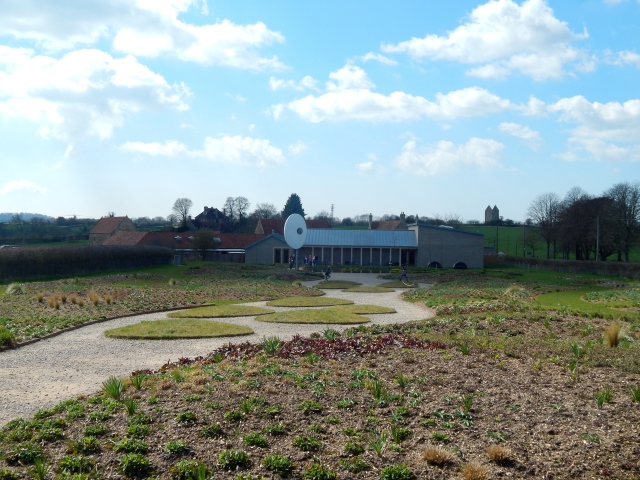 The garden was designed by award-winning landscape designer Piet Oudolf. it is supposed to be a perennial meadow, but it looked a bit sparse and bare to us! We may have to come back in the summer and see it again, as the photo’s on the Hauser & Wirth website are stunning.

At the end of the garden was the Radić Pavilion (designed by Chilean architect Smiljan Radić), a contemporary take on a folly, which was originally on display at the Serpentine Gallery in London. It’s quite an impressive structure, and is quite imposing at the end of the garden. It was really interesting wandering around the inside, and seeing the interior glow due to the sunlight. 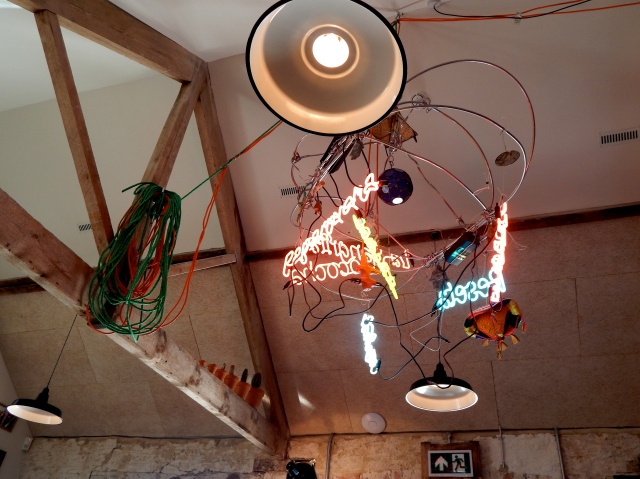 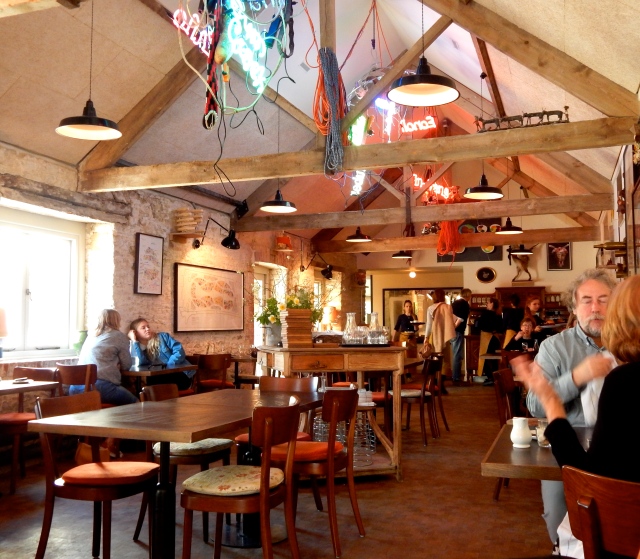 And then it was on to lunch. The Roth Bar & Grill is run by the team at the nearby At The Chapel in Bruton (worth a visit). The space is really interesting, and definitely feels part of the Art gallery, as you are surrounded by paintings, installations and little sculptures.

The menu was larger than I thought it would be from the website, comprising of about 8 ‘light’ dishes, their burger, 6 specials, 3 ‘from the grill’, and a good selection of side dishes. The food is sourced close to home, with much of it coming from the farm itself – the butter is even produced in the restaurant!

We were offered some bread and the aforementioned butter whilst we waited for the rest of our food – and it was delicious. I also really appreciated being offered free bread and butter, as so many restaurants charge for it now. 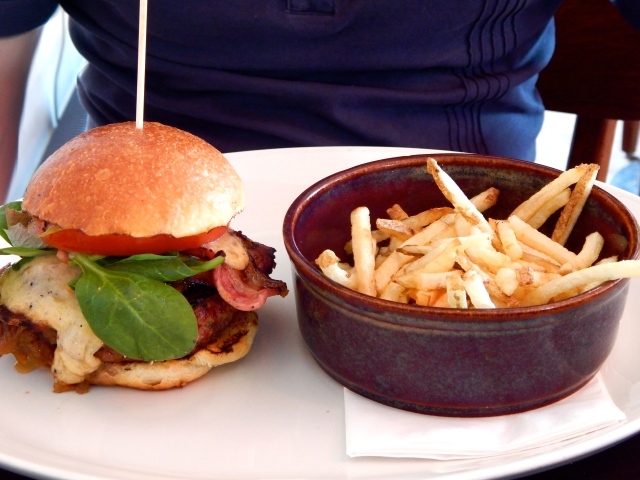 After that we went straight for mains. The OH went for the RBG Burger: ‘Beef burger, pickles, onions, Sandridge Farm bacon, smoked Godminster cheddar, brioche bun, chips’ £13. We’d driven past the Godminster shop on the way, so we knew that was pretty local… It was a good sized bun, lovely juicy bacon (obviously the good stuff, not the watery rashers you get in some supermarkets), and crunchy, tasty chips. 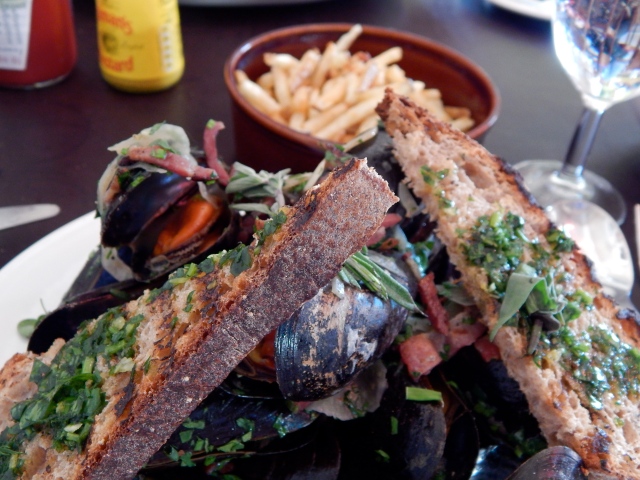 I went for one of the ‘Light’ meals, mainly because the puddings looked delicious and I wanted to leave room! The ‘Mussels, cider,fennel, bacon, chips’ (£12) was actually pretty big for a light meal, but I found it the perfect amount – it also came with (wild) garlic bread. The mussels were huge, the sauce was delicious, the chips were still crunchy and tasty, and the bread was an added bonus. 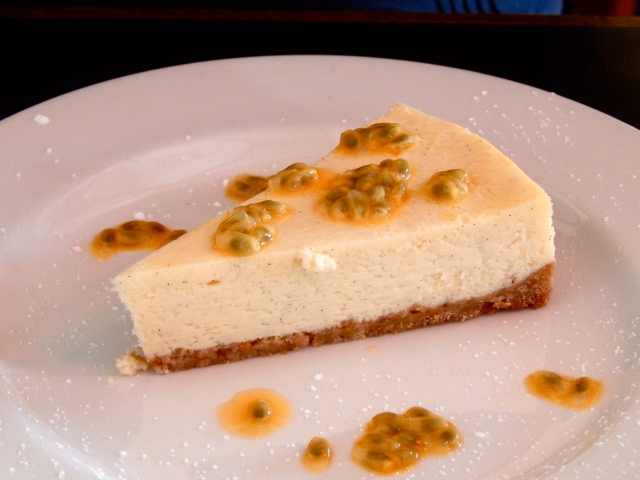 Puddings-wise I was torn between two on the menu (plus the cheeseboard, but I don’t think I would’ve had room for that). Luckily the OH couldn’t decide what to have, and was easily persuaded into trying one of the two – so I could try both 🙂

He had ‘Baked vanilla & white chocolate cheesecake, passion fruit’ (£6). The cheesecake was firm and creamy, and very sweet – luckily the passion fruit gave it the sharpness it needed.

I had ‘Blood orange & almond cake, rose water syrup’ also £6. I have a bit of a thing for blood oranges at the moment, so this was perfect. I love almond cake, and this was made more moist by the rose water syrup, which was delicately flavoured and didn’t overpower the orange. The orange was just on the right side of sharp and was lightly caramelised. I might have to attempt to make this sometime…

After pudding, we both had a very nice Cortado (£2.40) – feels so european in glass cups…

I also had a homemade ginger beer (£3.50) with my food which was delicious, and apparently made with caramelised limes, which I saw at the bar on the way in.

We had a wander around the shop, which has lots of nice books and presents for anyone arty or creative (including some interesting children’s books), and then went into Bruton for a wander, before driving back to Bath.

If you’re in this neck of the woods I’d recommend a visit to Hauser & Wirth and The Roth Bar & Grill – the beautiful Somerset countryside, a bit of culture, and some local, delicious food – it’s pretty much the perfect day out…

I recently bought a book called ‘Breakfast: Morning, Noon and Night’ (could be my mantra) written by Fern Green, a food stylist & writer. I’m a sucker for attractive cook books, and this one would certainly help you to wake up in the morning with it’s sunny cover! The book is helpfully split up into sections such as ‘healthy’ ‘hungover’ and ‘on toast’, and many of the recipes would be absolutely fine for supper or lunch as well as brunch – as the title implies…

I now have so many brunch recipes to get through (including a pinterest board here) that I may start a little weekly brunch theme if I get the time, as there are so many to try.

The first recipe I tried from the new book is called ‘Italian Eggs’ or ‘Prosciutto, Chilli, Eggs & Rocket’. It’s basically a twist on the traditional Mexican ‘Huevos Rancheros’ – put a load of stuff in a big frying pan, crack some eggs into it, and enjoy! This is under the Hungover section of the book, but it is equally as tasty when not hungover, as I can testify. If there was a ‘lazy’ section of the book it would definitely be in that, as it’s one-pan cooking (so less washing up after), and you can put the pan onto the kitchen table and let people grab their own. It’s therefore great if you have company too – just make extra.

2 slices prosciutto, roughly torn (we were greedy and had about 4 slices)

2 slices bread, torn or cut into cubes (we used wholemeal) 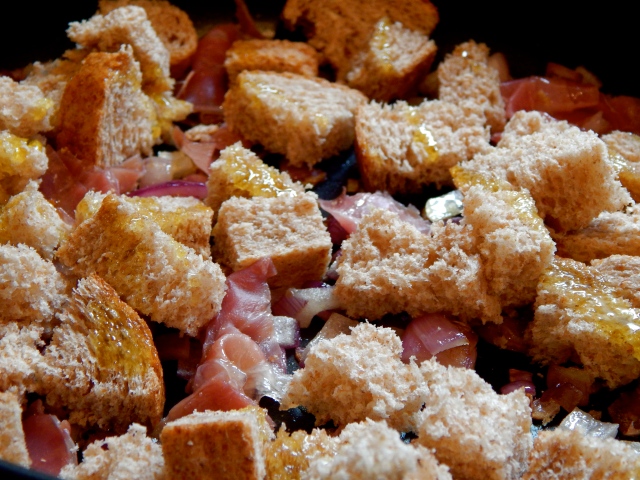 Pour some olive oil into a frying pan set over a medium heat. Add the red onion to the pan and cook for around 3 minutes, or until soft. Tip in the bread, prosciutto and chilli. Drizzle some more olive oil over the bread to help it crisp up into croutons. Fry for another 3 minutes, until the bread is crispy.

Add the tomato, vinegar (or lemon juice), and salt. Stir again and cook for another 30 seconds.

Make 4 gaps in the mixture. Crack your eggs into a small cup, then slide the eggs into the gaps. Put the lid on your pan and cook for another 2-3 minutes, depending on how well you like your eggs cooked. 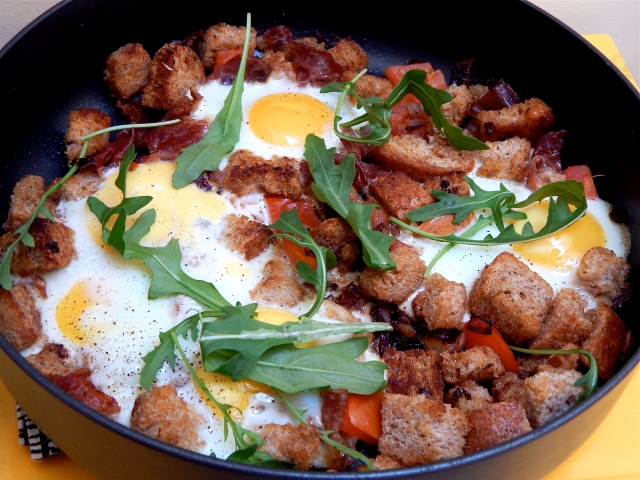 Top with the parsley and rocket, and season with salt & pepper. Add another drizzle of olive oil if you wish. 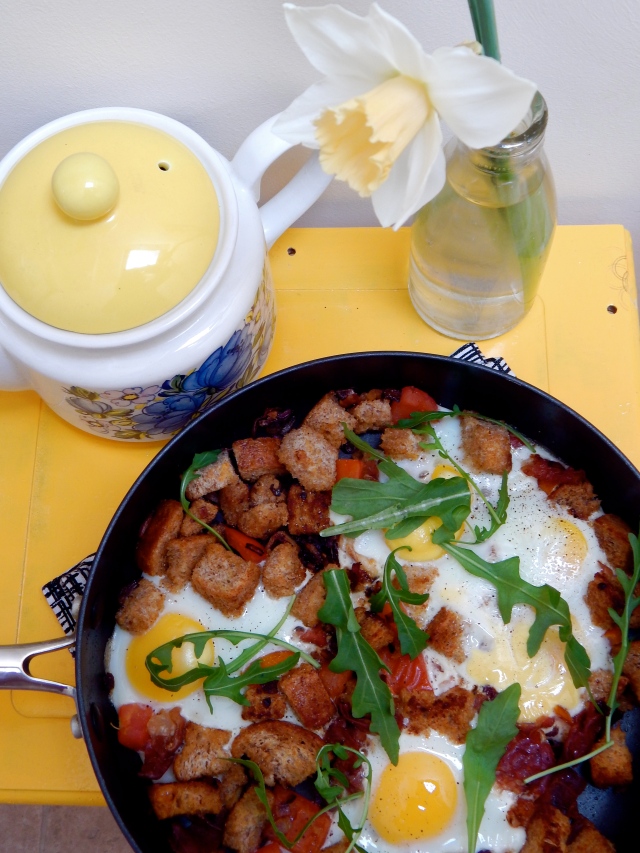 P.s I had big plans to make my own hot cross buns this year, but I’m afraid they fell by the wayside (because they take blinking ages and I’m too knackered) – I did however buy extra hot cross buns so I can make Hot Cross Bun Puddings with Salted Brandy Caramel Sauce – because that sounds epic.

I hope everyone has a relaxing and Happy Easter 🙂