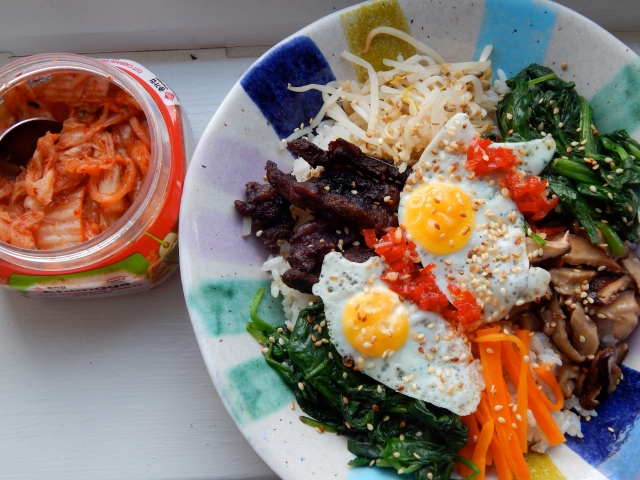 I’m one of those annoying people on Instagram who take photo’s of their food: I don’t do selfies, I do photogenic bowls of deliciousness instead. Some, taken in restaurants with dim lighting, don’t do justice to the beautiful creation before me. Others, when the light is good, or the food is particularly pretty, do have the desired effect. Bibimbap is one of the latter… and lots of people have realised it – over 158,000 photo’s tagged #bibimbap on Instagram and counting!

To be honest, I think Bibimbap probably did come to my attention from one of these photo’s – I love Asian food but Korean was a new one on me until recently, when restaurants started popping up and the food was papped. Also you can’t really forget a name like that…

Bibimbap is essentially, a bowl of rice, with lots of different toppings, all arranged artfully in a bowl, with an egg on the top. The combination of colours is beautiful, but it’s not all style and no substance – it is also totally delicious.

I came to make Bibimbap a few weeks back when we returned home from a bbq with leftover meat – Korean marinated flat-iron steaks. This was great because it meant we missed-out the most time-consuming part of the dish: the marinade. (If you can’t find pre-marinated beef try this: 2 1/2 tbsp soy sauce, 2tsp sesame oil, 3 cloves garlic, 3 spring onions 1/2 tsp black pepper. Mix all the ingredients together in a bowl, add the beef and leave for at least 30 minutes).

I have cheated a little with another element of the dish too, but that’s only because it’s tricky to find (in Bath anyway) – Gochujang chilli paste. This is a Korean institution and is a paste made with chilli, sticky rice and fermented soybeans.  If you have a large asian supermarket then you may well be able to buy it there, if not try souschef, an online shop with all sorts of foodie things. I found a chilli sauce recipe that I made instead, which is not the real thing (no fermenting!), but it tasted good so it will do for now. I did find kimchi in our local thai supermarket which is another Korean staple made from fermented vegetables and chilli, so that gave the dish a bit more authenticity.

I used fried quails eggs instead of regular because i’d been given some (from someone who keeps quails!), they looked cute fried, but one big egg would be fine – and more satisfying when you break into it.

If you want to try making Bibimbap the recipe is below – it isn’t difficult, it’s just lots of little things that need cooking separately, so you may end up with quite a lot of washing up! 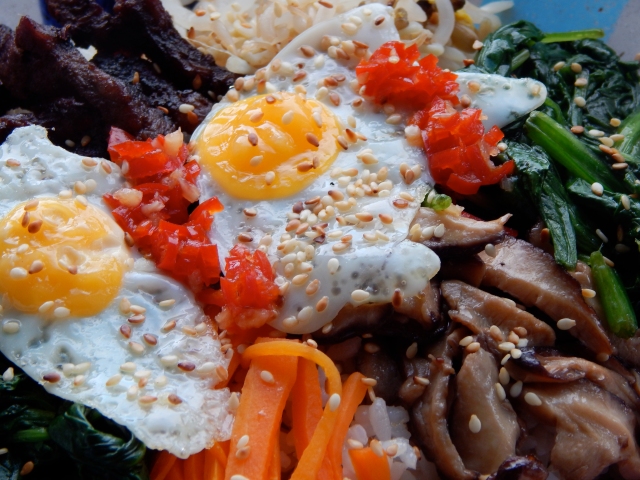 a selection of vegetables, such as:

A handful of toasted sesame seeds

2. To make the sauce, put the chilli’s and the garlic in a small pan and add the vinegar and the sugar. Bring to a boil, then cook for a couple of minutes so the mixture becomes sticky. Remove from the heat and leave to cool, stirring in the oil just before serving.

4. Heat some oil in a frying pan and stir-fry the mushrooms until cooked. Remove from the pan and fry the spinach until wilted. Squeeze out any excess water from the spinach and set aside. Keep warm.

5. When the rice is cooked, drain and put the pan back on the heat. Add some oil and then transfer the rice back into the pan, squashing it down into the oil. Leave the rice to cook for another 10 minutes (without stirring), until it is nicely crisped and browning on the bottom.

6. Using the same pan you used for the vegetables, fry the strips of marinated beef until cooked – between 3 and 5 minutes approximately.

7. In a clean pan, fry the eggs until the white is cooked but the yolk is still runny.

8. Now you’re ready to make it look pretty! Divide the rice into 4 bowls. Put a small amount of each of the vegetables and the beef around the rice, separated out so you can see all of the ingredients. Top with the egg(s) and the chilli sauce, and a dollop of kimchi, if desired. Sprinkle with the sesame seeds.

Gaze in adoration, then tuck in! 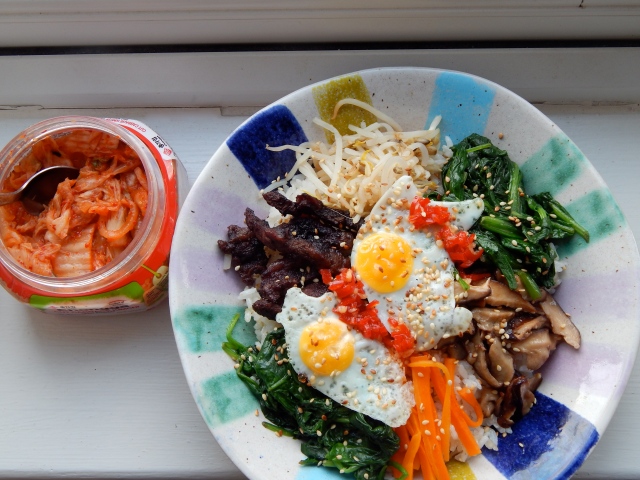