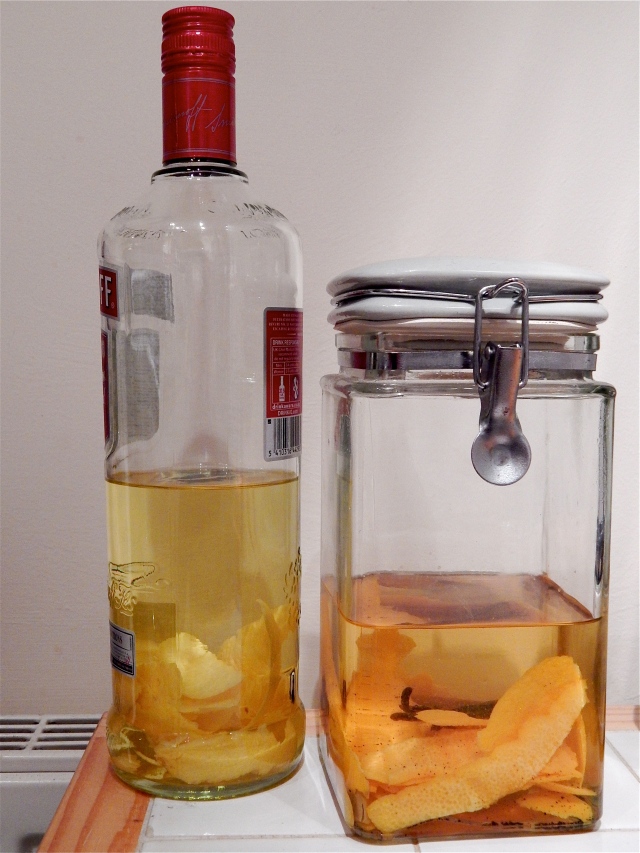 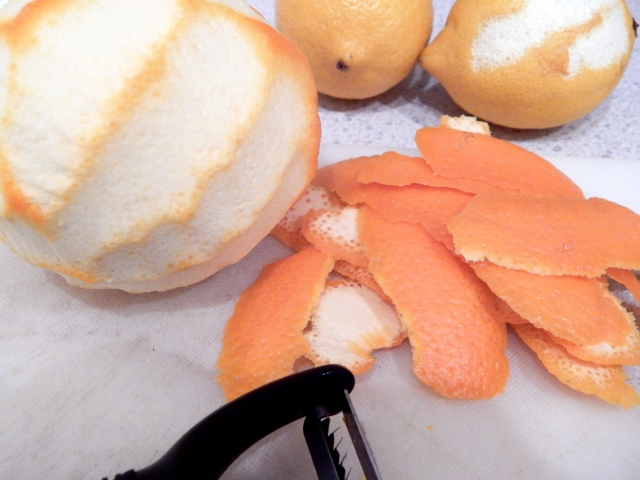 It’s two weeks to Christmas! I’m trying my hardest to get into the festive spirit, but it’s taking time this year – I wish I had time to make more presents and sing carols and eat mince pies, but it’s all being crammed into evenings at the moment, when I actually just want to flop on the sofa… This weekend we are buying a real Christmas tree which I think will help me get into the festive mood – I’ve always had an artificial tree, and been fine with it, but this year I want the scent of pine to lift my mood and make me feel Christmassy!

One Christmas gift I’ve squeezed into an evening or two this year, is some Liqueurs – Limoncello and Arancello. Limoncello is an Italian sweet lemon liqueur, and Arancello is the orange version. The Arancello has the added flavours of cinnamon, vanilla and cardamom to give it a spicy, almost mulled, flavour. I’ve made the Limoncello before and it was a success, but the Arancello is  new to me so I’ll be interested to see how it tastes.

They’re both made with vodka (again), as it’s the spirit with the least flavour, lemon or orange peel, and sugar syrup.

They take two weeks to make, so you’ve just got time to whip up a batch for Christmas day! (If you want to give them as presents before Christmas day, remember to put a ‘best after’ label on them…)

I bought one litre bottle of vodka and made half-and-half of these, but I will put the amounts for each recipe down as though you’re just making one or the other, then you can choose what you do!

Both make approx. 2 litres of liqueur. 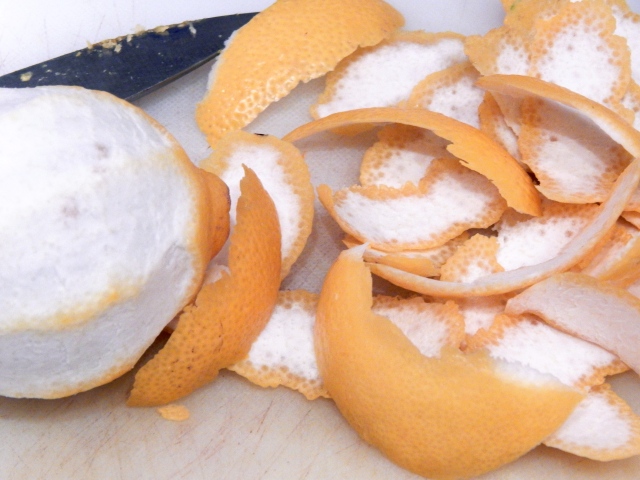 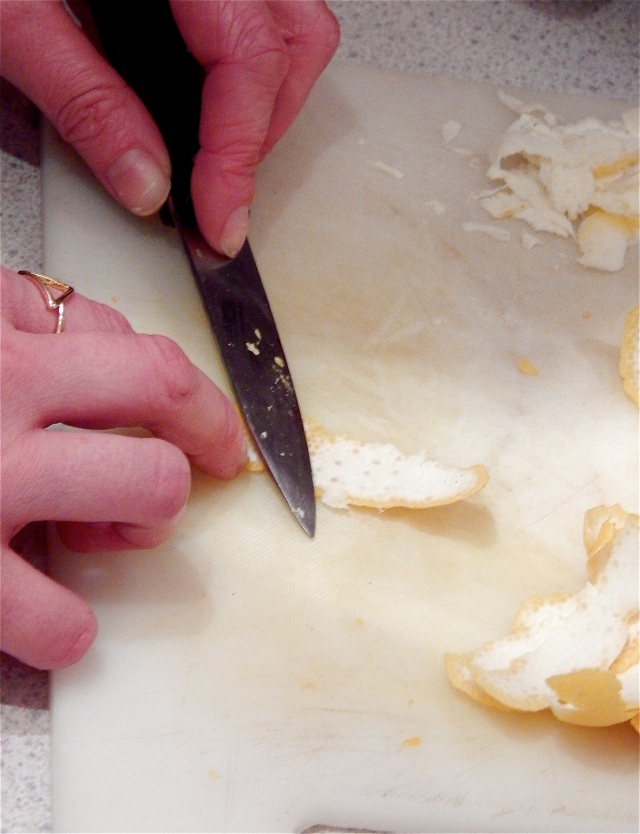 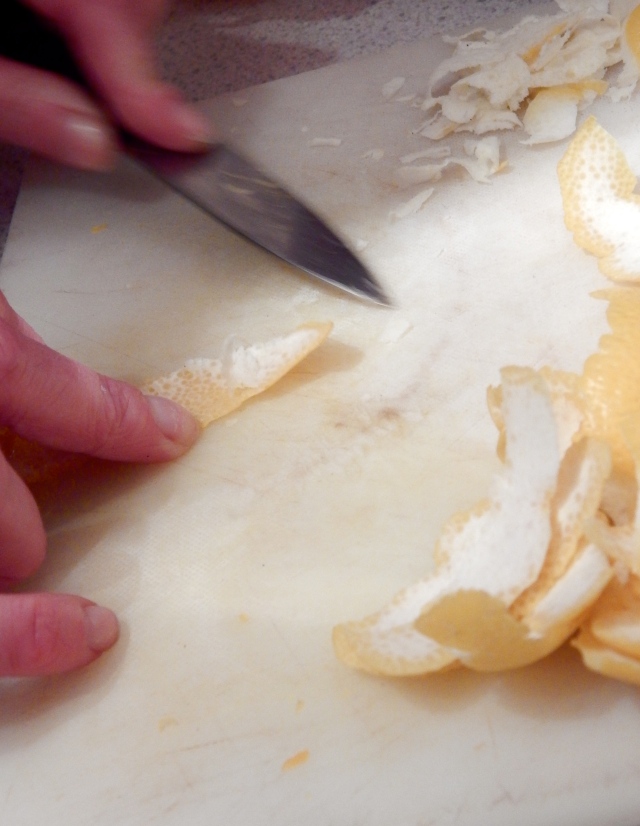 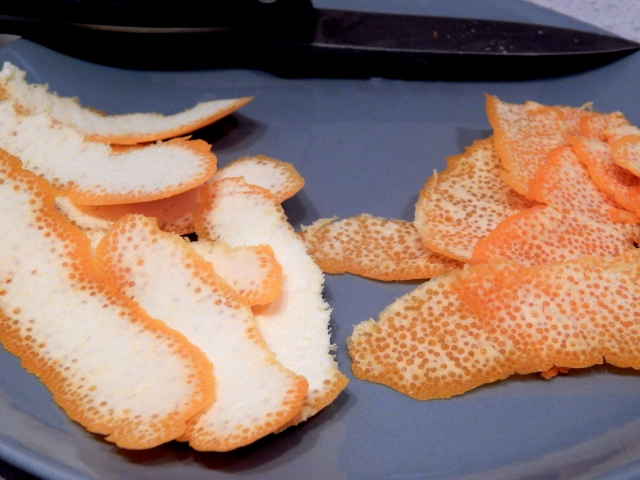 Remove the zest from the oranges or lemons using a peeler, try to make sure none of the white pith is left on the peel as it will make the drink taste bitter. You might need to scrape this off with a sharp knife. 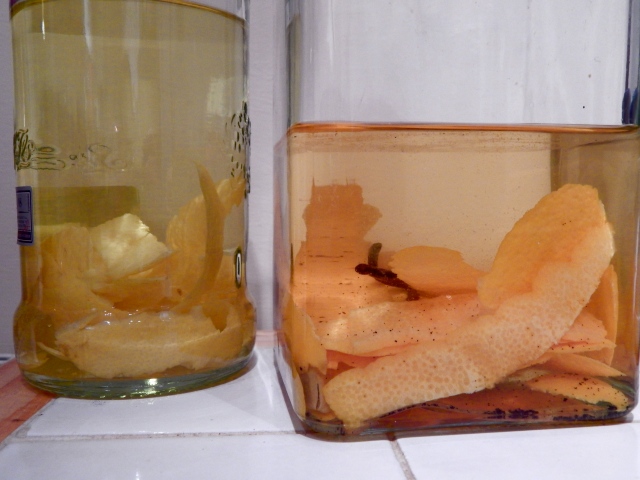 Put the zest into one big jar, or several smaller ones if giving to multiple people. If making Arancello, add the cinnamon, cardamom and vanilla pod also. Add the vodka to the jars/bottles and leave for a week, shaking the jar each day. 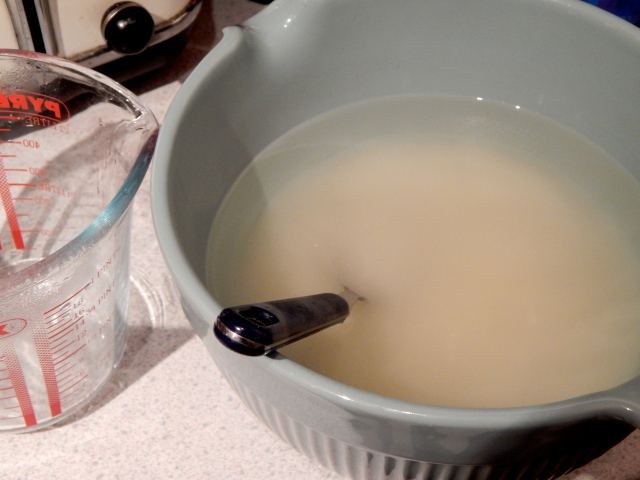 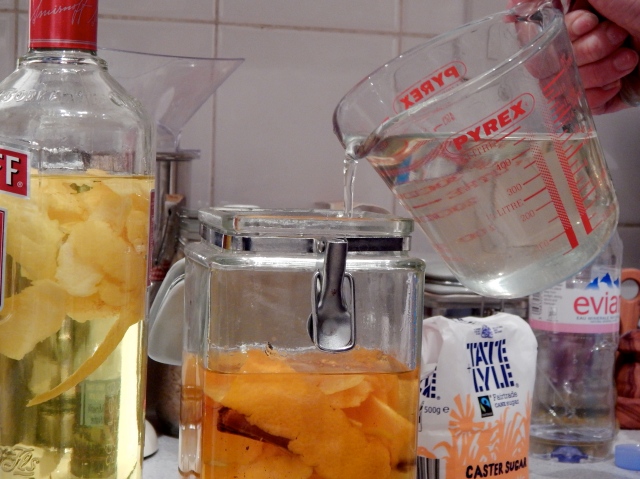 After a week, you can add the sugar syrup. Put the sugar in a heatproof jug, then pour over the required amount of boiling water, and stir until the sugar has dissolved. Pour the syrup into the vodka mixture and leave for another week, shaking the jar regularly. 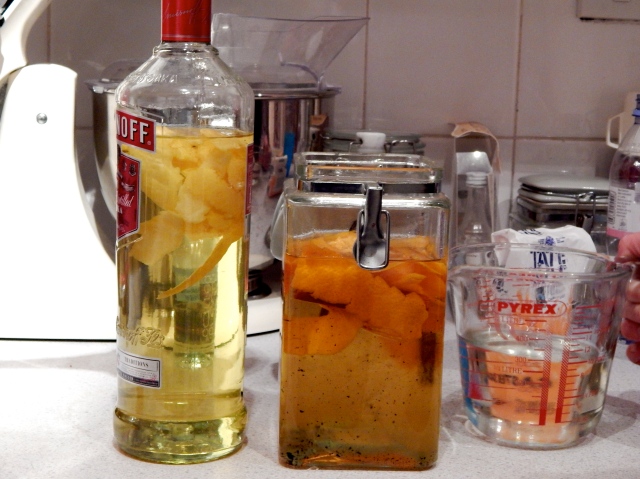 When the two weeks is up, strain the liqueur into your bottles, and throw away the peel (and spices). These drinks will keep bottled for 6 months, but I doubt they’ll last that long!

Limoncello is delicious ice-cold from the freezer, but I suspect the Arancello would be nice warmed up… I’m looking forward to trying them 🙂 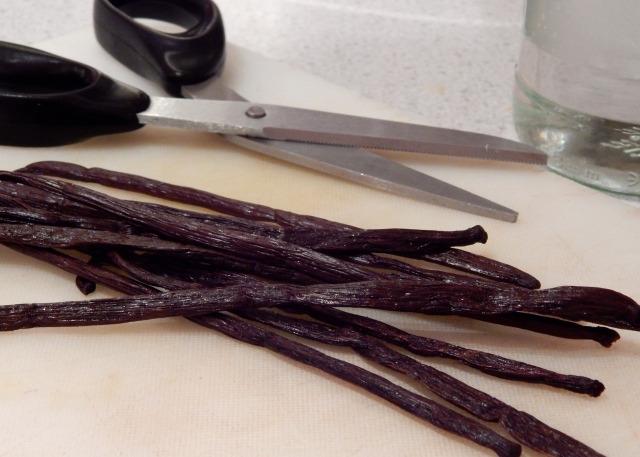 I’ll be honest, i’m struggling with motivation a little bit at the mo – blog-wise and life-wise, and now that Christmas is turning up pretty quickly, I’m realising I need to catch up with that too! I made Vanilla Extract last Christmas for friends and family, and I’ve had a request for more this year. This is fine, as it’s a really quick and easy thing to make – but it does need about two months to mature, so I really should’ve made it a month ago. It will be ok though, i’ll just give it to people with a little ‘Best after’ note so they know when to start using it!

Vanilla extract is made with only two things: Vanilla beans/pods, and alcohol. Commercial Vanilla extract can have sugar syrup in it too, but if it’s just used for baking there’s no need. Vanilla beans can be expensive in the supermarket, and you’ll need quite a few for this recipe (depending on how much you want to make), so I tend to buy them in bulk on Amazon or Ebay – this year I bought a pack of 10 ‘extract grade’ beans from here – they were £2.30 and they were perfectly good – not dry, and smelt amazing.

You don’t need to buy expensive alcohol either, I usually buy standard vodka as it has the least flavour, but I know people also use rum or bourbon which would be nice in baking too.

Anyway onto the super-easy recipe…

attractive bottles/jars to gift them in 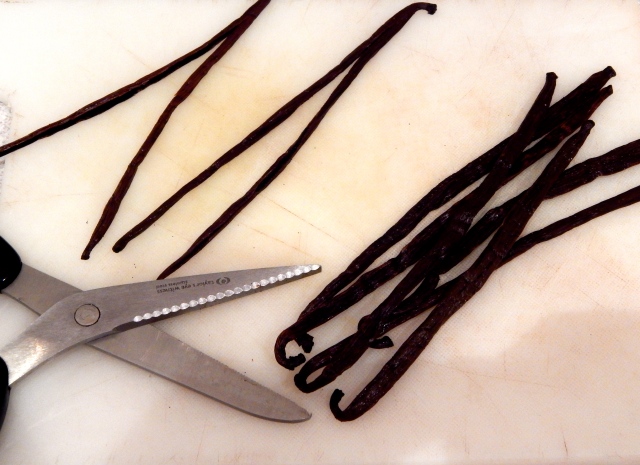 1. Cut your vanilla beans in half length-wise with kitchen scissors or a knife – if you’re going to leave them in the jars/bottles to continue maturing, leave them connected at one end (it looks prettier!). 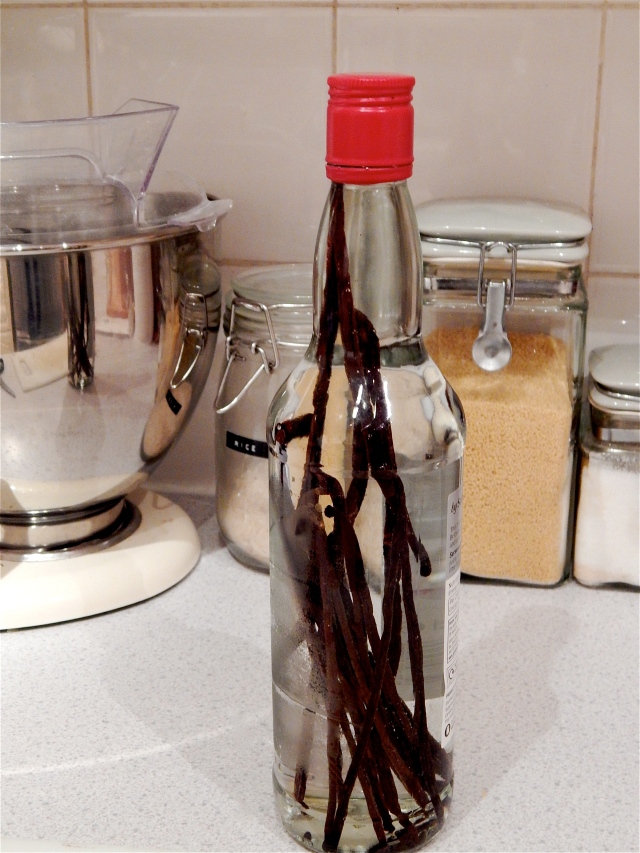 2. Put them in your bottle of alcohol.

3. Leave for as long as possible!

If you have your gifting bottles/jars ready, you can make the extract straight into these – just divide up the amount of beans/alcohol, and make sure you sterilise the jars before using. I haven’t got round to buying nice bottles yet (told you I was disorganised this year!), so will be leaving mine in the vodka bottle until the last minute, and then decanting and fishing out the pods so they can continue to mature in their new bottles. 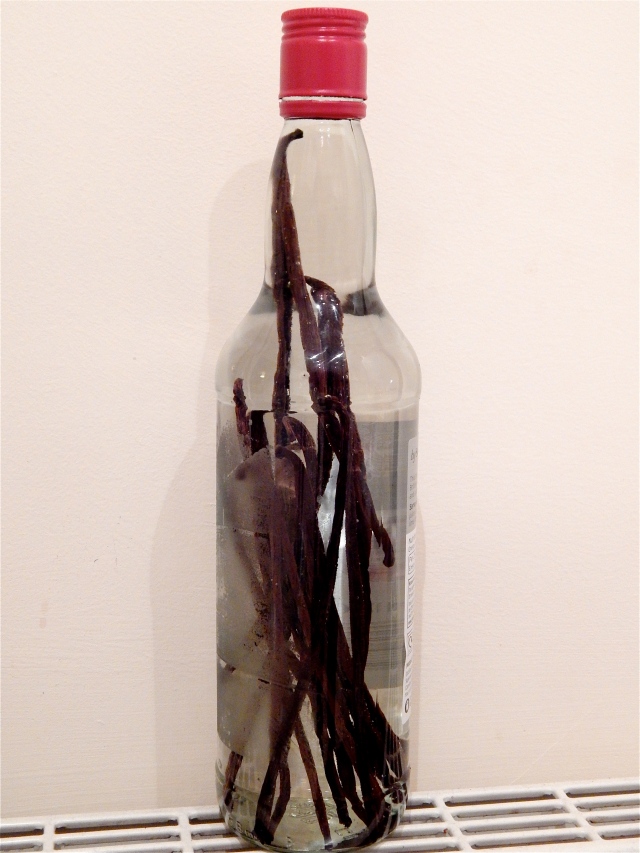 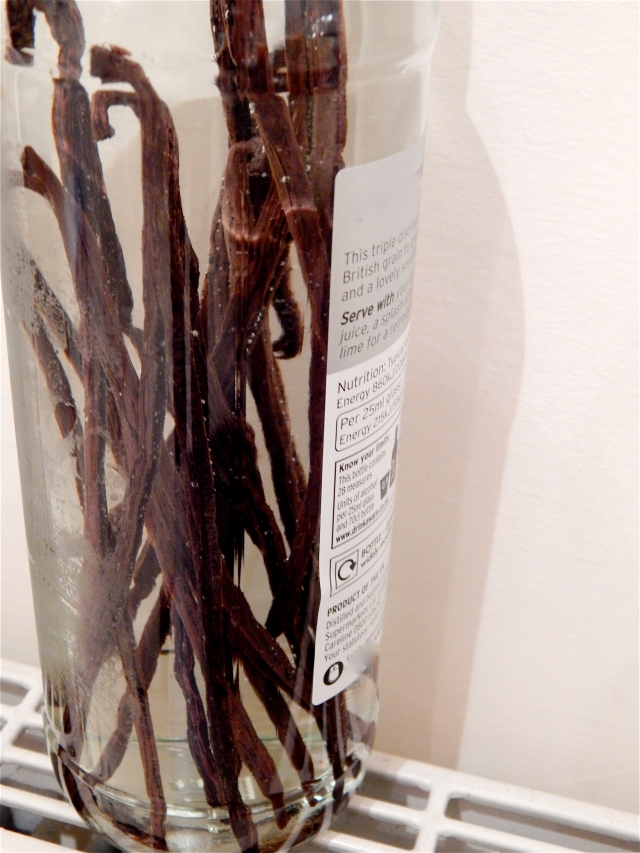 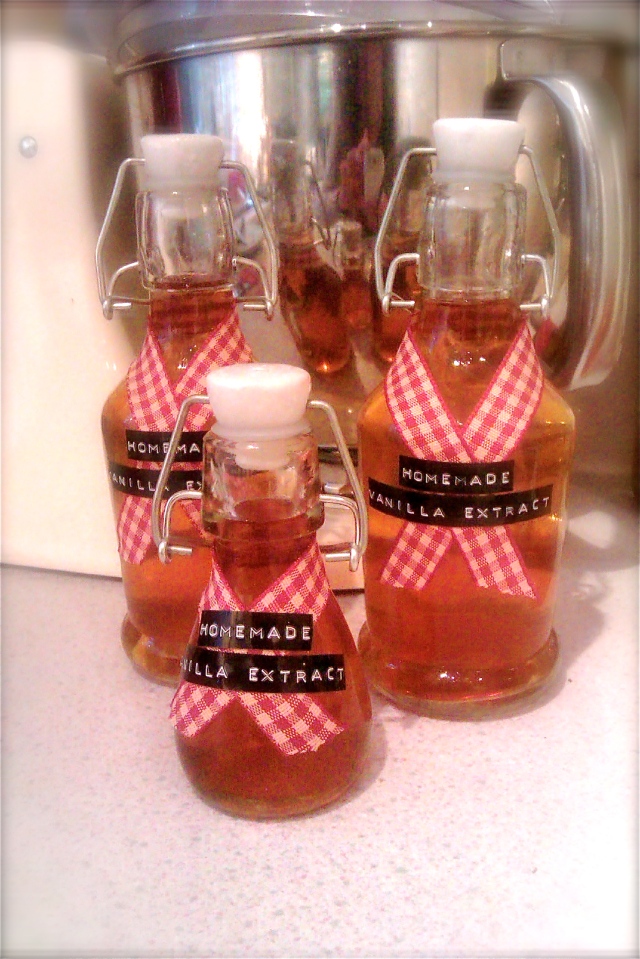 Even if you don’t want to give this as presents to people, it’s really nice to know you have an endless supply of vanilla extract to hand 🙂

P.s Vodka is an excellent base to make Christmassy liqueurs with too, and they only take 2 weeks – so i may be making limoncello or similar soon – watch this space…